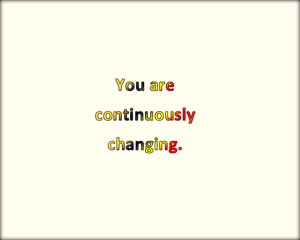 Time and distance changes everybody, the child you were ceased to exist a long time ago, your memories of that time will be blurred if you even remember them at all, most likely you will only remember events that were outside of your normal everyday life. Of course, people were nicer, children were well mannered, the streets were safer, there wasn’t as much rain and the days were longer. None of those things were true but that’s what you believe.

Your teenage years were spent carving out your identity. By the time you reached your early twenties, you were fairly sure you had no idea what you wanted to do with your life or who you were going to spend it with. (The trials and tribulations of a teenager). The people you hung around with couldn’t help you because they were on the same path. Your parents tried to guide you, however, they weren’t having much luck as you didn’t want to live the same life as your parents so you listened to them but you didn’t hear what they were saying.

As you got older your friends drifted away from you, they found their own partners settled down and generally got on with living their own lives. You met up from time to time but you found you had little in common with them when you weren’t partying the night away.

As you hit your thirties, early forties you begin to question your beliefs. Is the meaning of life to get up every day, bring the children to school, go to work, come home, have a conversation with the top of your children’s heads as they look at their smart phones, cook and clean, pay bills and then go to bed? If you had a good day, you’ll fall asleep, if not, you’ll lie awake plotting the revenge you’ll never carry out. Yes, of course you’ll go out every other month so you know you’re not missing out on stuff.

The answer to the above question is yes, during that time in your life, that’s pretty much it, but there is light at the end of the tunnel, your fifties. Unfortunately, as you begin to reach the light you’ll start to notice the odd ache and pain you didn’t have before. One of the most dangerous events you’ll undertake is putting on your socks in the morning without putting your back out. Also at this time you’ll begin to brace yourself when you cough as it can have the same effect as putting on socks, not to mention you might need to change your underwear. You’ll meet the people you knew from time to time and wonder why they’re looking a lot older than you think you look. You’ll think to yourself, you don’t want to be seen hanging out with the elderly.

You’re now into your sixties and you begin to tell people your age once more as your proud to have reached it, you don’t tell them you’re really a sixty year old running around with the thoughts of a 25 year old. You want to do everything a 25 year old does but your body keeps telling you to forget it. You’re good at forgetting things these days so that’s exactly what you do. Midway through this decade you get invited to an old folk’s party and you take offence as old people are now the people in their eighties & nineties. How dare they ask you to their party? You’re old enough to go, that’s why.

You have reached your mid seventies, at the very mention of the word death, you stand or sit up that little bit straighter saying to yourself, “not yet, I’m too young.” You’re happy to go to old folk’s parties so that you have somewhere to go besides the shops and mass. You become more outspoken than at any other time in your life as you’ve no fear of what people think of you anymore. You just wish you’d learned this lesson a long time ago.

You don’t need to live an extraordinary life to enjoy life, you’ve just got to appreciate the one you’ve got.

If you refuse to accept every opportunity you're given, you can't blame anybody for the life you're living.
View all posts by BrendanDunne →
This entry was posted in attitude, life, life lessons and tagged autobiography, change, humor, humour, Inspiration, life, life lessons, life quote, Motivation, Quote. Bookmark the permalink.

Working through the Dark Night of the Soul to emerge as me.