People Can be Insulted Through Ignorance

Ignorance of the laws of the land is not an excuse a judge will accept for committing a crime, but in our everyday lives it’s an excuse many people often use. The words normally used are, “I didn’t know.” This is used by people who have little empathy or as the phrase that’s more commonly used today, “low EQ (emotional quotient or intelligence).” This arises when people have little or no understanding of how their words and actions affect other people. Their attitude is, if it doesn’t affect me, why should it affect anybody else. They don’t realise everybody else has different levels of sensitivity.

In a working environment this can be sorted by the hr department, a level of professionalism is expected from people in the office. If somebody’s mental well-being is affected by somebody else’s behaviour, it’s the responsibility of the company to find a resolution.

In the outside world, it can be more difficult to find a resolution because it depends on the relationship between the people in question. If there is an open communication channel between the two people a simple please stop doing that, it’s very annoying. 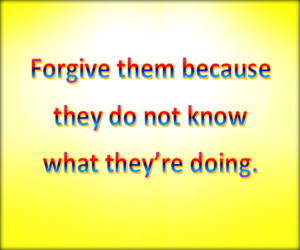 If the relationship is more complicated or the person thinks it’s everybody else’s problem, not theirs. The resolution is to stop hanging out with the person in question, or take the moral high ground and forgive them for their actions. “The weak can never forgive, forgiveness is an attribute of the strong.”

The first resolutions will work because you can’t be affected by people who are not part of your social group.

The second resolution will work better because when you forgive somebody else, you understand they are not responsible for their actions; they have grown up in an environment where they didn’t learn from their parents or peers, and they didn’t have the EQ to learn for themselves what is acceptable and unacceptable behaviour.

Some of my favourite quotes on this topic are,

If you refuse to accept every opportunity you're given, you can't blame anybody for the live your living.
View all posts by BrendanDunne →
This entry was posted in attitude, Inspiration, life, Self Improvement and tagged behaviour, EQ, forgive, forgiveness, forgiveness quotes, human behaviour, ignorance, low emotional quotient, quotes. Bookmark the permalink.

Lyrics, Sentiments and Me

This Perspective of the Now
Praying for Eyebrowz

Doing the best I can with what I have